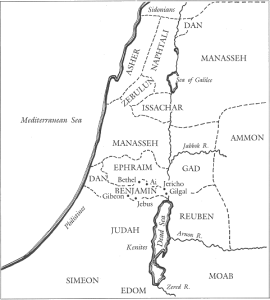 Imagine for a minute the weight of the responsibility Joshua had to face in distributing the land among the twelve tribes. I often face adversity when having to referee my three girls as they protect their own space between their bedrooms and best places to play around the house. Joshua and the Israelites made it to a point where they could see beyond the major battles and conquests and begin to settle into the land that was promised to them through their fathers. I wonder about the disputes that happened between the people as the land was divided up, how many decisions would have been appealed because someone didn’t get a Dead-Sea view or beach access along the Mediterranean shores.

There is a certain amount of curiosity inside my mind that wants to see a picture of how Joshua approached this task. What did the planning documents look like, how did he select the land and why did the people listen to him. One of the things that I pick up on as I read between the lines of the awkward pronunciations of the names of the tribes, clans and cities is that Joshua is receiving his plans from God, He is orchestrating the whole event. God through Moses and Joshua had designed the plan for inheritance by direct order and some through the casting of lots.

Joshua’s dependence on God for direction in every area of this journey is inspiring, his faith in trust for protection as they battled, his kindness and patience as he distributed the land and his commitment to keeping the people on track with God is something to be desired as leaders. Joshua was a successful leader because of his faith in God. At the end of the day, at the end of my time it would be my hope and prayer that someone could write the same about me… Steve was a great leader because of his faith in God, not because it’s about me but because it is all about God.

One thought on “God… The Master Planner”